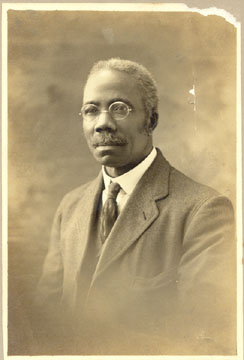 Augustus Nathaniel Lushington was the first African American to earn a Doctor of Veterinary Medicine (D.V.M.), earning the doctorate from the University of Pennsylvania in 1897. After practicing in Philadelphia for two years, he became an instructor in veterinary sanitation and hygiene at Bell Mead Industrial and Agricultural College at Rock Castle, West Virginia. He later resigned and returned to private practice in very segregated Lynchburg, Virginia, where he became known for the proficient and high-class service that he offered.

Augustus Nathaniel Lushington was born August 1, 1869 on the island of Trinidad. His paternal grandfather from DR Congo, was brought to Trinidad to work at the sugar plantation on the island, and his father, William, worked as a butcher, who raised produce for sale at market and did farm work. Young Lushington went to teacher-training school and worked as a teacher and principal for many years. He left for Venezuela, where he worked as a clerk in the town of La Guayra for a British-owned railroad. After three years, Lushington went back to Trinidad but found that opportunities were insufficient on the island.

Lushington began his career of being a veterinarian treating farm animals. He set up a veterinary practice in Philadelphia but remained there for only two years, before becoming an instructor in Veterinary Sanitation and Hygiene at Bell Mead Industrial and Agricultural College at Rock Castle, Virginia. Deciding to return to his veterinary practice he opened his practice in Lynchburg, Virginia, after learning that there was only one other veterinarian. Lushington treated cows, horses, and other livestock, often walking for miles through the woods from Lynchburg to reach the farms where his services were needed. His philosophy, according to Arthur Bunyan Caldwell’s History of the American Negro: Virginia Edition, was that “the first essential to progress is a better understanding between the best elements of the two races.” This, he believes, would lead to closer and more harmonious relationships; mutual confidence and both races would gain as all advanced toward better citizen-ship. In Virginia, however, Lushington experienced neither harmonious relationships nor good citizenship. White farmers often availed themselves of his services but then refused to pay him—and in the repressive atmosphere of the South in the early 1900s, Lushington had neither the option of taking legal action nor even the practical right to refuse services to deadbeats.

Since the pay was little for a veterinarian and white people refused to pay him, he decided to take on other responsibilities. Lushington was a statistical reporter to the Bureau of Animal Industry, the Federal Department of Agriculture, and a member of the Lynchburg Chamber of Commerce.

Augustus Lushington died on February 12, 1939. He and his wife had three daughters. One daughter, Drucilla Moultrie, taught in Lynchburg schools for about fifty years. Another daughter, Bernetta Parks, worked for Bennett College in Greensboro, North Carolina. The third daughter is not mentioned enough to find her records.

Dr. Alfreda Johnson Webb was born February 21, 1923 in Mobile, Alabama. She was the first of two African American women to graduate from a school of veterinary medicine in the United States in 1949.

She received her BS from Tuskegee Institute in 1943, and her Doctor of Veterinary Medicine (DVM) in 1949 from the Tuskegee Institute (now University) School of Veterinary Medicine. She was the first of two African American women to graduate from a school of veterinary medicine in the United States in 1949.
Afterward, she pursued her master’s degree in anatomy taking a leave from Michigan State University in 1950.
Her career started as an instructor in anatomy at Tuskegee in 1950, where she taught as an associate professor until 1959.
From there she moved to Greensboro, North Carolina and taught biology at North Carolina Agricultural & Technical State University until 1978.
She was the professor/coordinator of the Laboratory Animal Science from 1977 until her retirement. Her research areas included histology, cytology, and embryology.
Besides her teaching career, Dr. Webb worked in politics serving as a legislator, holding several positions within the Democratic Party of North Carolina.
In 1971, she was the first African American woman in the North Carolina General Assembly, serving on many committees including serving as the chairperson of Minority Affairs, President of the Democratic Women of N.C.,
She was a member of the North Carolina Council on Sickle Cell Syndrome and on the Board of the NC Center for Public Policy Research.
She retired from the position of state minority representative in 1978 to run for the state House in Guilford County.
During her time at NC A&T in the late 1970s, Webb served on the planning committee for the school of veterinary medicine for North Carolina which was founded at North Carolina State University in 1981.
She died at Moses Cone Memorial Hospital in Greensboro, NC after a battle with breast cancer on October 14, 1992.
In 1949, Webb became the first black member of the Women’s Veterinary Association
She received the Alpha Kappa Alpha Award for Political Excellence and the Distinguished Alumni Award from Tuskegee University in 1972.
She was inducted into the NC A&T Agriculture Hall of Fame in 1999.
In 2016, the North Carolina State College of Veterinary Medicine established a $50,000 endowed Dr. Alfreda Johnson Webb Scholarship Award to cover educational expenses for two students from under-represented groups.